Why Every Ecommerce Merchant Should Enable Google Analytics 4 Today 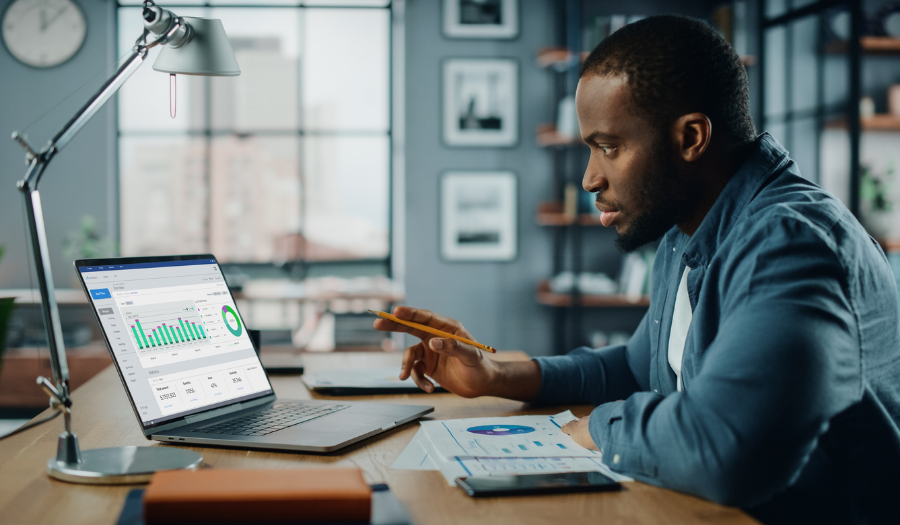 An ecommerce merchant who doesn’t use Google Analytics is like a teenager without a smartphone—exceedingly rare. Most everyone who runs an online business these days relies on the data this powerful, free tool can produce. Merchants around the world rely on its insights to adjust and improve their online shops—the navigation, the SEO, the design, the content—in order to get more visitors to spend more time there, which leads to more sales.

That’s why any major changes to this widely used platform send shockwaves throughout the marketing community. Google announced one such change in March 2022. As an ecommerce merchant, understanding exactly what they have planned will be crucial to your future analytics success. Let’s dig into what’s coming, and then examine why you should take immediate steps to prepare.

What’s changing with Google Analytics, why it’s a big deal

In case you haven’t already heard, Google will be retiring Universal Analytics in July 2023 in favor of Google Analytics 4 (GA4), which is essentially a completely new platform. Since Universal Analytics is currently the most common version of the tool, this change will affect millions of users. Here’s why this is a big deal:

Why Google is making this change

Millions of businesses will have to make the switch to the new version and learn how to use it. Why did Google make a choice that would have such a widespread impact? In the original blog post where they made the announcement, they gave two key reasons why the new version wins out in GA4 vs Universal Analytics:


To sum up, Google is helping merchants “prepare for the future,” which is what the announcement blog post was titled. The digital landscape has changed drastically in the last 15 years, since the creation of the data model ‌Universal Analytics was built on. GA4 promises not only to respect privacy for internet users, but to provide better, more accurate data for its analytics users. It’s not the first time the platform has had to evolve to keep up with the world, and it probably won’t be the last. That said, making the shift can be intimidating or frustrating for some users.

How ecommerce merchants should prepare for the shift to GA4

It’s important that you take the first steps as soon as possible to avoid complications. If you wait to switch until the grace period after Google sunsets Universal Analytics is over, you’ll lose access to the historical data for your account. Without it, of course, you won’t be able to make year-over-year (YoY) comparisons that can impact your future business decisions. If you’re asking yourself, Should I set up to Google Analytics 4 on my site today?, the answer is yes—don’t wait.

The image below shows the steps to make the shift from Universal Analytics to Google Analytics 4, which can seem a bit overwhelming. However, the good news is that you can make huge progress by just focusing on steps 2,3 and 4 right now. They’re the easiest steps to complete, and you can do them right away. Step 1 and 5-12 should still be done, however they're not as time critical. You’ll have a full year to figure out the rest of the other steps which have a steeper learning curve. 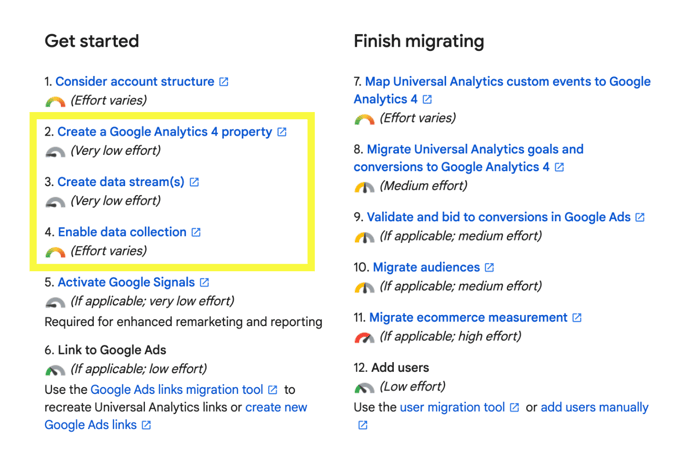 Completing steps 2,3 and 4 will get your data flowing into Google Analytics 4, giving you the ability to get accustomed to how GA4 works, and start to build up enough history to run year-over-year comparisons next year.

Why is year-over-year data so important for ecommerce business?

The year-over-year growth(YoY) metric paints a clear picture of business performance overtime. Every industry has its unique season and this metric can highlight the difference between growth vs seasonality. Let’s use the retail industry as an example. According to the National Retail Federation, the holiday season in November and December account for 19% of annual retail sales.

Without doing YoY comparisons, you may assume your store is getting tremendous growth. Investopedia explains, “If an investor looks at a retailer’s results in the fourth quarter versus the prior third quarter, it might appear that a company is undergoing unprecedented growth when it is seasonality that is influencing the difference in the results.”

YoY growth impacts your decision making. If you don’t start collecting this data on Google Analytics 4 before July 2022, you’ll lose the ability to show year-over-year comparisons. Save yourself the headache by taking a few minutes to complete the small steps above. Starting early also gives you the chance to compare your ecommerce data in Universal Analytics with the new data in GA4 to make sure everything matches as you’d expect.

Also, you don’t want to find yourself in the position of wondering if changes in your reported data in 2022 vs. 2023 are caused by the platform change from Universal to GA4, or due to real business metrics changing. It’s absolutely critical that you build up data in GA4 to make sure you get apples-to-apples reporting after Google turns off Universal Analytics.

GA4 for ecommerce is the future

Google Analytics 4 is the future, as Google says themselves. As with many changes in life, this one may be uncomfortable at first, but it is necessary and will provide many benefits in the future. Set a game plan to do the quick GA4 setup for your ecommerce website today—or at least before July of this year. Getting a jump on this transition is an investment in your future success if you want to continue taking advantage of the most popular free analytics platform out there.

Prev
Previous post: How Online Merchants Can Regain Customer Trust (And Why They Should)
Next
Next post: Your Product Pages Won’t Convert Without These 4 Elements 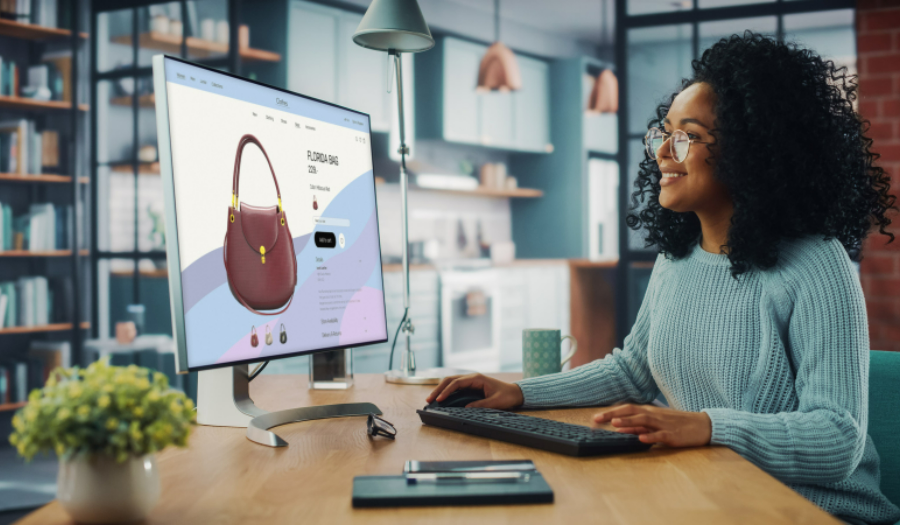 Your Product Pages Won’t Convert Without These 4 Elements 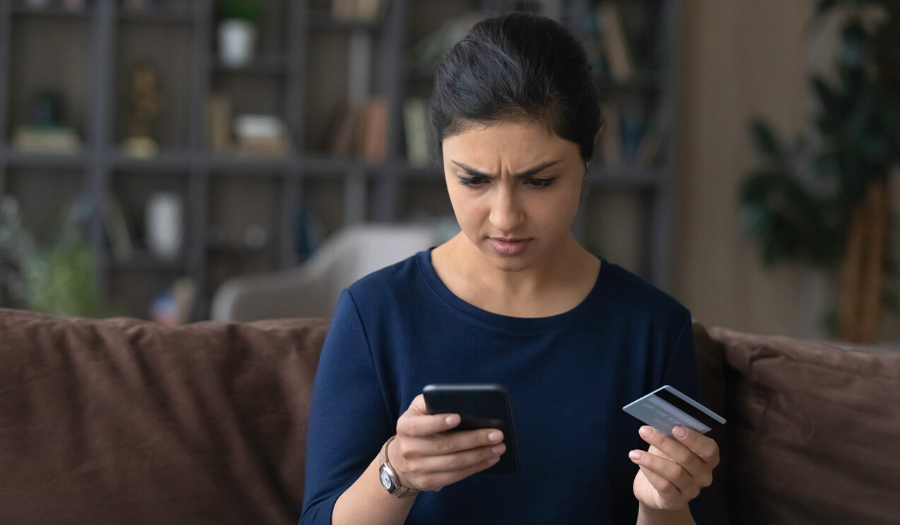 4 Common Reasons Customers Initiate Chargebacks, and What to Do About Them 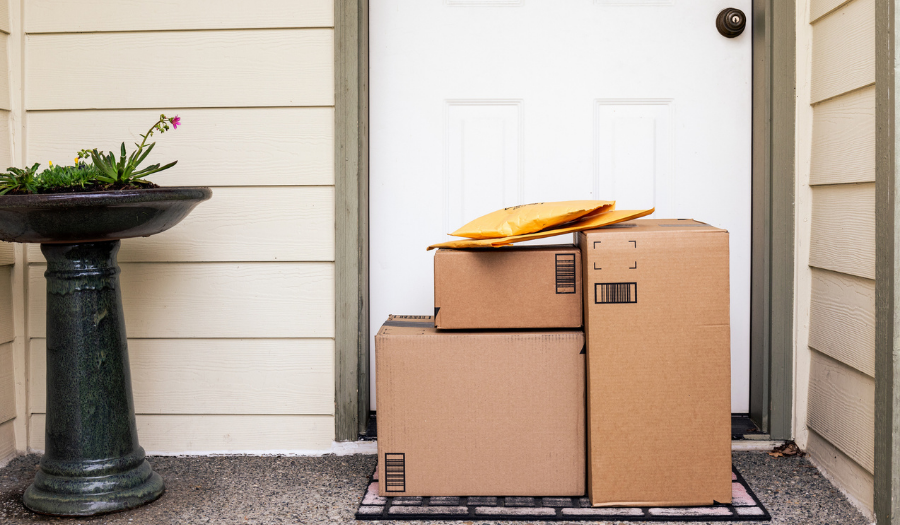 Stay in the know

Subscribe to the Norton Shopping Guarantee blog and and receive the latest in ecommerce best practices.